Please consider the time difference before you call!

Local time in Thailand is GMT+7hrs.

Waterline Marine is based in Phuket, Thailand.

We also offer survey- and consulting services in Bangkok and Pattaya as well as in Singapore, Myanmar, Malaysia, Indonesia and Vietnam. 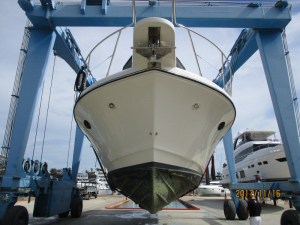 Never buy a used boat without a survey!

No matter how experienced a sailor you are or how many boats you have owned previously, purchasing a used yacht without the services of a professional marine surveyor is asking for trouble.

A Pre Purchase Survey is the most detailed type of survey we offer. It is a comprehensive inspection of the entire vessel and all her systems and takes 2-3 days to complete depending on tides and other logistics.

The resulting Survey Report is a detailed account of the condition of the vessel and all her systems as found at the time of survey. The Report can be used for marine insurance applications so there’s no need to have an additional Insurance Survey.

Pre Purchase Surveys often pay for themselves because in many cases the surveyor discovers defects that allow you to negotiate a lower purchase price. 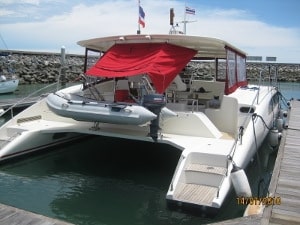 Feedback before you start traveling

Found a yacht for sale in Thailand but not willing to fly long distance just to have a look? The Pre Purchase Opinion (a.k.a. General Condition Assessment) is a fast and cost-effective way of getting a professional opinion on the overall condition of a far-away yacht; the kind of feedback you need before you commit to a full survey.

The Pre Purchase Opinion consists of a slow walk-through of the entire yacht, including machinery spaces, allowing the surveyor to form an opinion about the state of affairs aboard the vessel. This Opinion is then conveyed to the client by email or phone.

Please be aware that a Pre Purchase Opinion is not as detailed as a full survey and does not include a written Survey Report. 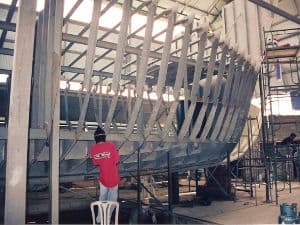 Quality control from concept to launch

Boat building is fraught with delays and cost overruns and there are many unhappy new-boat owners that simply did not get the yacht they paid for. If you are having a new yacht built you want to make certain the yard is building it to the standards and specifications that were agreed to in the contract.

The best way to ensure this is to appoint a marine surveyor as your official representative.

We offer a complete yacht construction survey package that consist of three parts:

Regular visits to the shipyard with an email report after each inspection. Besides quality control, we also keep track of the construction timeline, making sure the client’s payments to the shipyard are in line with the actual State of Completion as specified in the build contract.

Commissioning the yacht and testing all the systems in real-life conditions followed by extensive sea trials until everything works as advertised. Lastly, we submit a full and final Survey Report which can also be used for marine insurance applications. 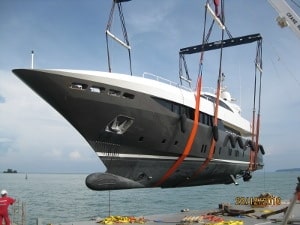 Delivery of a brand-new vessel

The handover of a new yacht to her first owner is usually a joyous affair but in all the excitement important details are often overlooked. The proud new boat owner signs off on the yacht and later discovers that certain systems were not properly commissioned.

If you are expecting delivery of a new yacht we recommend that you assign us to make a thorough inspection of the new vessel just prior to the delivery date and also be present during the actual handover.

We will handle all the last-minute technical details allowing you to enjoy the occasion in full. 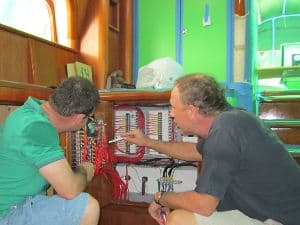 Before your new yacht’s warranty period expires it is best to let a marine surveyor make a thorough inspection of the boat and all her systems.

We document any issues that should be rectified under warranty in a professionally written Survey Report enabling you to effectively negotiate with the manufacturer. 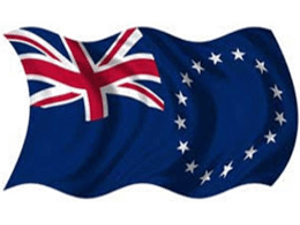 Waterline Marine is the Appointed Surveyor in Thailand for Cook Islands and St. Vincent & the Grenadines.

We are authorized to handle initial applications as well as the renewal procedures for both private and commercial yachts.

We handle all the paperwork and submit all the required forms with the Flag Authority Registrar on your behalf. 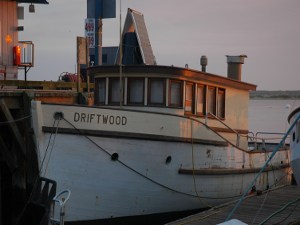 For new applications or renewals

Marine insurance companies require a survey report for all new applications as well as renewal surveys every five to ten years. The purpose of these surveys is mainly to determine if your yacht is an acceptable risk for the Underwriters.

We believe that having an experienced pair of eyes checking out your yacht every few years has many benefits but we understand that most yacht owners consider insurance surveys an unwelcome expense.

This is why we offer two options for insurance surveys.

Option 1 is a single inspection while the boat is either on the hardstand or in the water. This is the quickest and most economic option.

For best results we recommend Option 2 but we understand the yacht owner may have other priorities. 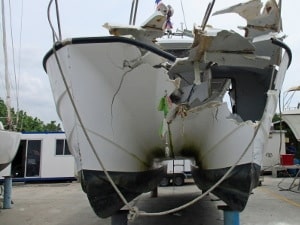 The role of the surveyor during insurance claims

If your yacht sustains damage due to bad weather, collision, grounding or any other type of incident you should immediately notify your insurance company.

In most cases the insurance then assigns a surveyor (at their expense) to assess the damage and act as a liaison between the yacht owner and the Underwriters.

The surveyor’s initial job is to investigate the cause of the incident, assess the damage and submit a preliminary report which includes recommendations for repairs and an estimate of the expenses.

After that, the surveyor assists the boat owner with getting quotations for repairs and helps to select the right repair companies. Once all repairs are finalized and all expenses known the surveyor submits a final report to the insurance company.

Good cooperation between the Insured (the yacht owner) and the surveyor is essential to ensure a damage claim proceeds smoothly and without delays. 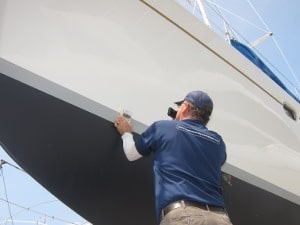 Hull Surveys are often required by insurance companies or Flag Authorities to verify if their requirements for sound construction and weathertightness are met.

To avoid extra costs we recommend that you schedule your hull survey during your vessel’s annual haul-out or dry-docking. 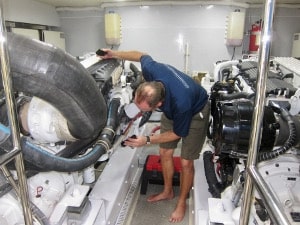 How well does your crew look after your boat?

If you keep a yacht in Phuket and pay a crew to maintain her, you may want to know how well your boat is really being looked after while you’re away. As surveyors we often see neglected yachts that are only spruced up just before the owner arrives.

Maintenance Surveys are a cost effective way of getting the feedback you need. We visit your boat -unannounced if you wish-, make a detailed inspection and report back to you. Any issues can be then rectified before they become a real problem. 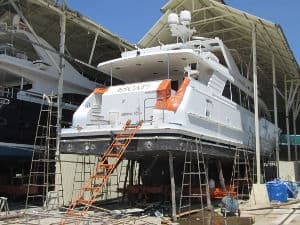 Phuket is a great place for yacht repairs and refits but quality issues, delays and cost overruns are common problems. Having a representative on site -someone who speaks the language and has the right technical knowledge- is essential for the boat owner’s peace of mind.

We offer a flexible schedule of regular on-site inspections to verify that all work is carried out as agreed and to the appropriate marine standards. Each visit is followed by a brief email to keep the vessel owner informed of the progress. 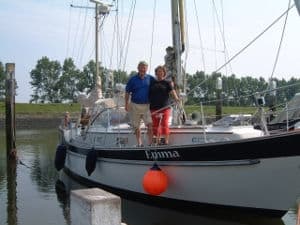 Prepare for a successful sale

Your boat is on the market and the yacht broker has found a prospective buyer. This buyer assigns a marine surveyor to inspect your yacht and to your dismay this surveyor finds a number of defects that you were totally unaware of. You are now asked to lower your price or -worse- the sale falls through altogether.

To avoid this scenario we recommend that you get a Pre-Sale Survey before you put your yacht on the market. Our surveyor performs a thorough inspection similar in scope to a pre purchase survey. Next we send you a detailed Summary of Deficiencies that you can use as a checklist to rectify all defects before prior to sale.

This type of survey does not require a haul-out (unless there are known problems with the hull) and can be done while the vessel is berthed in a marina. It is a cost-effective way of preparing your yacht for a successful sale.

In addition we can also prepare a complete and accurate inventory of your vessel which will increase your chances of a successful sale. 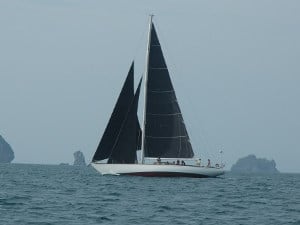 Appraisals are carried out to determine a realistic Fair Market Value of a yacht.

After a full inspection we issue a Valuation Report that describes the vessel’s overall condition and other factors that influence the Fair Market Value.

The Valuation Report is an official document that can be used for insurance, financing, mortgages, business partnerships and for estate- or divorce settlements. 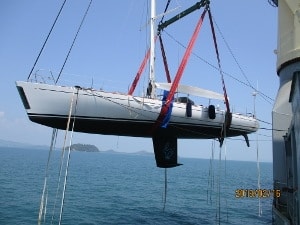 Shipping your yacht on a cargo vessel

Transporting your yacht on board a large freighter is an excellent way of accessing new cruising grounds without exposing your vessel to the wear and tear of long ocean crossings.

Sometimes however things go wrong when the yacht is lifted on or off the cargo ship and we recommend that you assign a surveyor to be on site during load and discharge operations. If a mishap occurs you have your own “eyes” on site and a professionally written report that describes exactly what went wrong -and why.

During Load Surveys we start with an inspection of your yacht’s hull and decks prior to arrival alongside the freighter and we document any pre-existing damage. We review the Lift Plan, check the lifting gear and verify all equipment certificates.

We work closely with the Load Masters and record the lifting operation, keeping a detailed time-line. Once your yacht is safely on deck we remain on site until she is lashed and secured in accordance with the Stow Plan and the IMO Code of Safe Practice for Stowing and Securing Deck Cargo.

Next we observe and record the lift procedure until the vessel is afloat alongside the freighter and we remain on site until your yacht departs under her own power.

The resulting Load- or Discharge Survey Report is an important document that will help the yacht owner obtain fair and reasonable compensation in case damage was sustained during lift operations or as a result of inadequate lashing and securing. 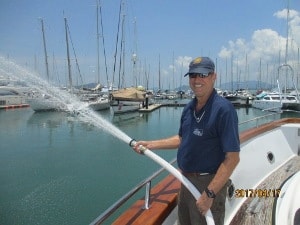 How safe is your yacht?

Our Safety Surveys consist of a comprehensive inspection of all safety equipment, lifesaving appliances, firefighting equipment and on-board procedures to determine if your vessel’s Flag Authority requirements are met.

Regular Safety Surveys are a must for vessels in commercial operation such as dive boats and charter yachts operating under MYBA regulations.

Safety Surveys are also a great marketing tool. Stand out above the rest and show your prospective clients that your yacht is complies with international standards.

Waterline Marine conducts safety surveys that are appropriate to the size of your vessel and its Intended Purpose and in accordance with your vessel’s Flag Authority Code of Practice. 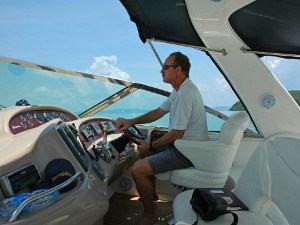 Testing a yacht in real-life conditions

Sea trials are part of any condition survey but can also be conducted separately. The objective is to test the propulsion system and controls in real-life condition: Main engines, steering, trim tabs & stabilizers as well as generators, watermakers and black water discharge; systems that cannot be assessed while inside a marina.

In case of sailing yachts we also hoist all sails and verify the deck hardware and running rigging. Tenders, dinghies and outboards and motorized water toys such as jet-skis can be tested during sea trials as well. 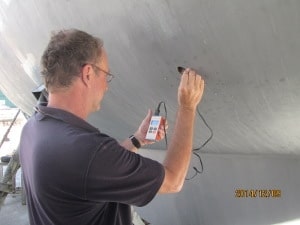 In most cases we conduct these tests ourselves with our own equipment. In other cases we use the services of a trusted sub-contractor. Reports are issued for all types of non-destructive testing.